For this day, it was dedicated solely for Bearstown Ski Resort. I badly needed to see snow, as a couple of days had already passed without seeing a whole bunch of them.

To go to Bearstown in Gyeonggi-do, you have to take a bus departing from Seoul. To reserve a seat for the bus, I had sent an email to the bus company on the Thursday before leaving to Korea. You can email them at good-bus@naver.com. They usually reply within 24 hours. The roundtrip fare was KRW 5,000, which you pay once inside the bus.

We thought we would be picked up at Insadong, but they asked us to be at City Hall station instead. Without even eating breakfast, we left the hostel at around 6:30 AM. It was raining a bit and the moment we got out of the train, it only took less than a minute before the bus arrived. It left at exactly 07:10 AM.

Mon was a bit grumpy throughout the ride. He was extremely hungry the whole time and we did not arrive not until half past 9. >_< So when going to Bearstown, buy at least something for the ride, especially if you will be running late. Not a single convenience store was in sight around the exit at City Hall station where the bus stops.

Upon arriving at Bearstown, I forgot how mad Mon was. There was finally snow, so #byefelicia. Just kidding!

The first order of the day was to buy breakfast. We badly needed coffee and something to eat. There was a canteen near the parking area, but we opted to go somewhere else instead (translation: where the food was hopefully cheaper).

At the ledge area right below the slopes was a kiosk for quick snacks, selling coffee and other stuff. The menu below is only a part of the three panels, there were cheaper things listed there.

When a gust of wind blew while I was taking out money from my wallet, a KRW 10,000 escaped my grip (while BLACKPINK’s Boombayah was blaring from the speakers. I could never dissociate the song to this mishap). It conveniently went through the cracks of the wooden floor and I was gobsmacked. Bye, bye money! T_T

After eating, we had to face the million dollar question: to ski or not to ski? We traveled all the way to the ski resort thinking we could just lounge around, watch people and eat. Maybe sledding? But it’s going to be a long day just to do that. Eventually, we decided that it was not everyday that we get to be there, so we might as well go for it!

I was particularly scared because I never had any competence with ice skating. I was thinking that skiing might give me the same pained bum after.

To ski or not to ski

We had walked quite a bit around the cashier area, looking for sledding options. Unfortunately, there were none not unless you brought one with you. LOL

When we were about to pay for the ski, there were not a lot of people. In fact there were just the two of us, foreigners. It cost KRW 36,000/person for a half-day skiing session, which is already inclusive of the the skiwear (total of KRW 72,000 for the two of us, amounting to around Php 3,100). Of course, it is cheaper if you have your ski equipment and other things with you, as you only pay for the use of the facility. The gondola is paid separately, BUT WHY WOULD WE USE A GONDOLA?

We left our things in a locker operated by coins. I can’t remember how much it was, but it was worth remembering that we had to re-insert coins the moment I decided to open and get some of our things again.

We first had to get the ski shoes, which had to fit snugly. Next were the skis, which was a bit tricky to get in and out off with chunky footwear. For the ski pants and jacket, I chose a bright-colored one. ^_^

Again, we did not bother renting a gondola to save ourselves from embarrassment and imminent death. Fortunately, there was this conveyor-belt thing at the left side, which you can ride to go to a milder slope. It is worth mentioning that not once I managed to slide smoothly from this, and fell several times. I’ve learned to deal with it, though.

I was surprised that I CAN ski, albeit it was on a gentle slope. I only fell once when another tourist just walked right across my route and somebody had to budge. It was a real life chicken game. Mon had caught the whole thing on video. It was hilarious as he had a running commentary of the collision.

On the ‘conveyor belt’

I did not fall down; this was a deliberate pose (Veruschka hunty!)

Few weeks before going to Korea, I had watched a documentary on GMA News TV with Sandra Aguinaldo. She was trying to ski for the first time as well, and I took note of all the lessons given to her by the instructor (e.g. fall sideways if you were to fall, not to try break the fall with your arms, etc).

We did not bother tackling the steeper slopes

Almost ready to call it quits

And of course, I did not miss the chance to do this. The snow in Nami Island back in 2012 was too frozen to even do this. Besides, it was a tourist trap that I’d look like a fool even attempting it.

My attempt at a snow angel

We did the whole stretch of time until 12:30 PM. By the time the sirens blared, we left the slopes to change to our normal outfit. It was very difficult walking with these shoes on. I always felt like toppling with each step.

For lunch, we went back to the canteen. Most of the stores were already open (there was even a KFC inside). However, we wanted something else, thus we ordered sweet and sour pork. But if there’s one thing we should have learned from out Hongdae sojourn, it was not to underestimate the food serving. We ordered two but it was good for 6 people.

Not the one to waste food since I was kid, I did my best to eat as many as I can. But not even the skiing made me tired enough to be able to finish everything off. =( I really felt bad.

Immediately after lunch, we went straight away to The Caffe, located almost near to the hotel. There is also a convenience store in the same area, from where we bought some drinks. The Wi-Fi egg loaned to us by the hostel did not work outside Seoul. However, there were free Wi-Fi hotspots around the area, and I managed to talk to my family via Skype while waiting for our coffee.

Once done with our fix of coffee, we dropped by the lobby of the hotel just to sit and take photos.LOL There were plenty to see inside, but not a lot of people walking around except for hotel guests. We basically sat everywhere, including the floor next to the bears.

There might definitely be a CCTV here, with people observing us make a fool of ourselves. But as I always say when visiting other places: they will not see us tomorrow, anyway!

Bears at the lobby

At around 5:00 PM, we decided to stay near the parking area. But we did not miss the chance to take some interesting photos with the snow and be done with it. The last thing we needed was to be left by our scheduled bus from Bearstown.

No regrets that we jump the gun on skiing. We had plenty of crazy memories with the couple of hours trying to slide down the slopes without any concussion. It felt really fast going down, but seeing the videos, we looked like a tortoirse on a race! The deception!

While I did this fabulous jump shot LOL 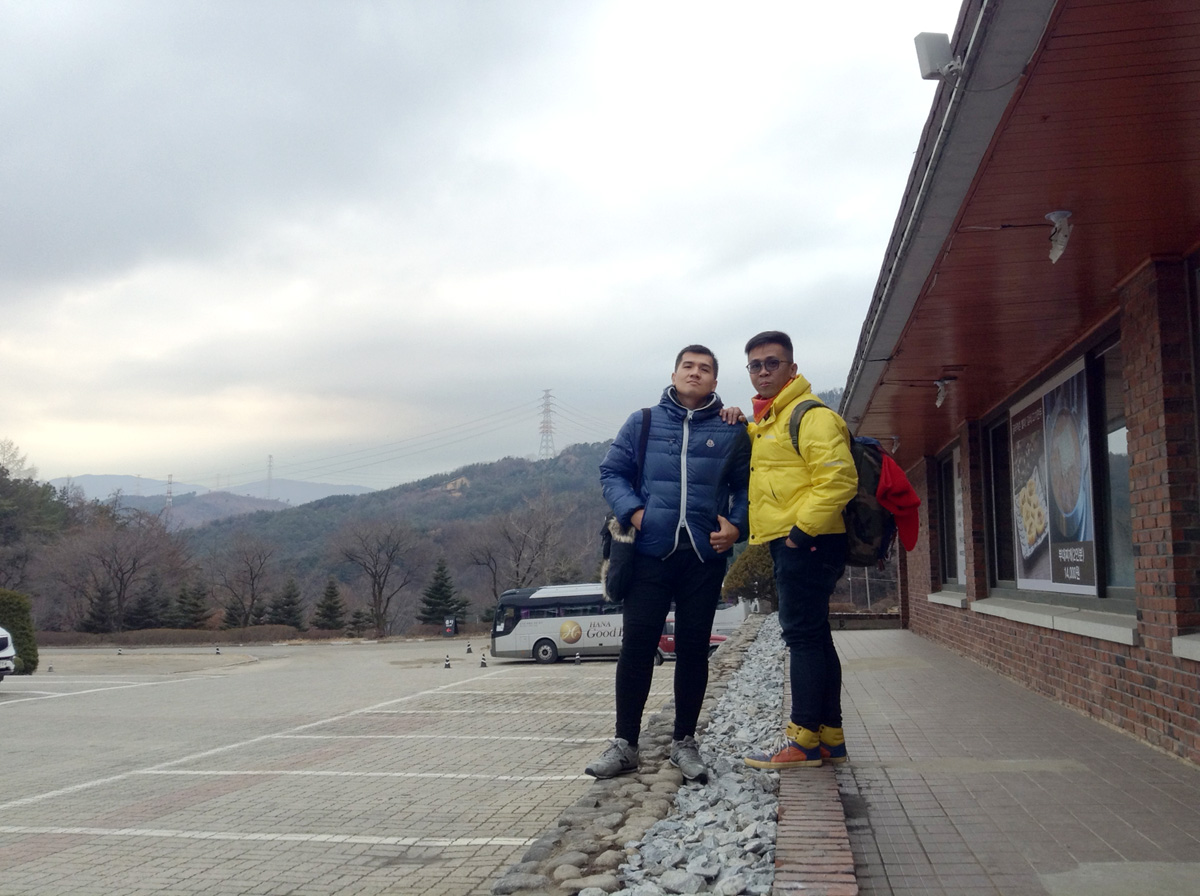 Before boarding the bus

The ride back to Seoul was, erm, uneventful. We were so tired that we barely noticed the time pass by. I woke up a little over 8:00 PM and we were already in the city. Mon, to my surprise, was already wide awake. That was a first!

Back at City Hall station

Shine bright like a diamond — going back to Myeongdong

We disembarked at City Hall station, and went straight down to the trains. We already agreed not to eat anywhere fancy or what, rather consider the street food for dinner. From KRW 1000 to KRW 3,500 apiece, we were already full by our 5th stick. I wanted the buttered scallops too, but it cost a bit too much. Non, merci.

And these dessert fishies!

For the past couple of days, we have been shopping for souvenirs/gifts to our friends each night in Myeongdong. I made it clear that I no longer want to do a one-time, big-time buying in one night. I just could not bear walking from one store to another just to buy.

Mon had a long list, while I had just a couple on top of my head.LOL We even dropped by H&M to buy clothes that cost only around Php 200-300! I think the highlight of this buying spree were the cute socks. I bought around 20 pairs not only for me, but also for my friends.

Walked all the way from Myeongdong to Chungmuro

At the end of the road near the Lotte store, a throng of people gathered to see this light extravaganza. It was a sight to behold that made you feel that Christmas is literally around the corner. The day after would be our one last whole day in Korea.

See related posts in this “Winter in Seoul 2016” series.