As of yesterday, PAG-ASA has announced the start of the southwest monsoon. This only means that the rainy season is already upon us, and I can now wear my boots again! This also means not using lot of leather bags. While I had a good experience with the Collonil Waterstop spray, it was just too costly. The bottle only lasted for about a month, with the rotation that I do.

To welcome the rainy season (that just seem wrong), I used a canvas bag with minimal leather parts. 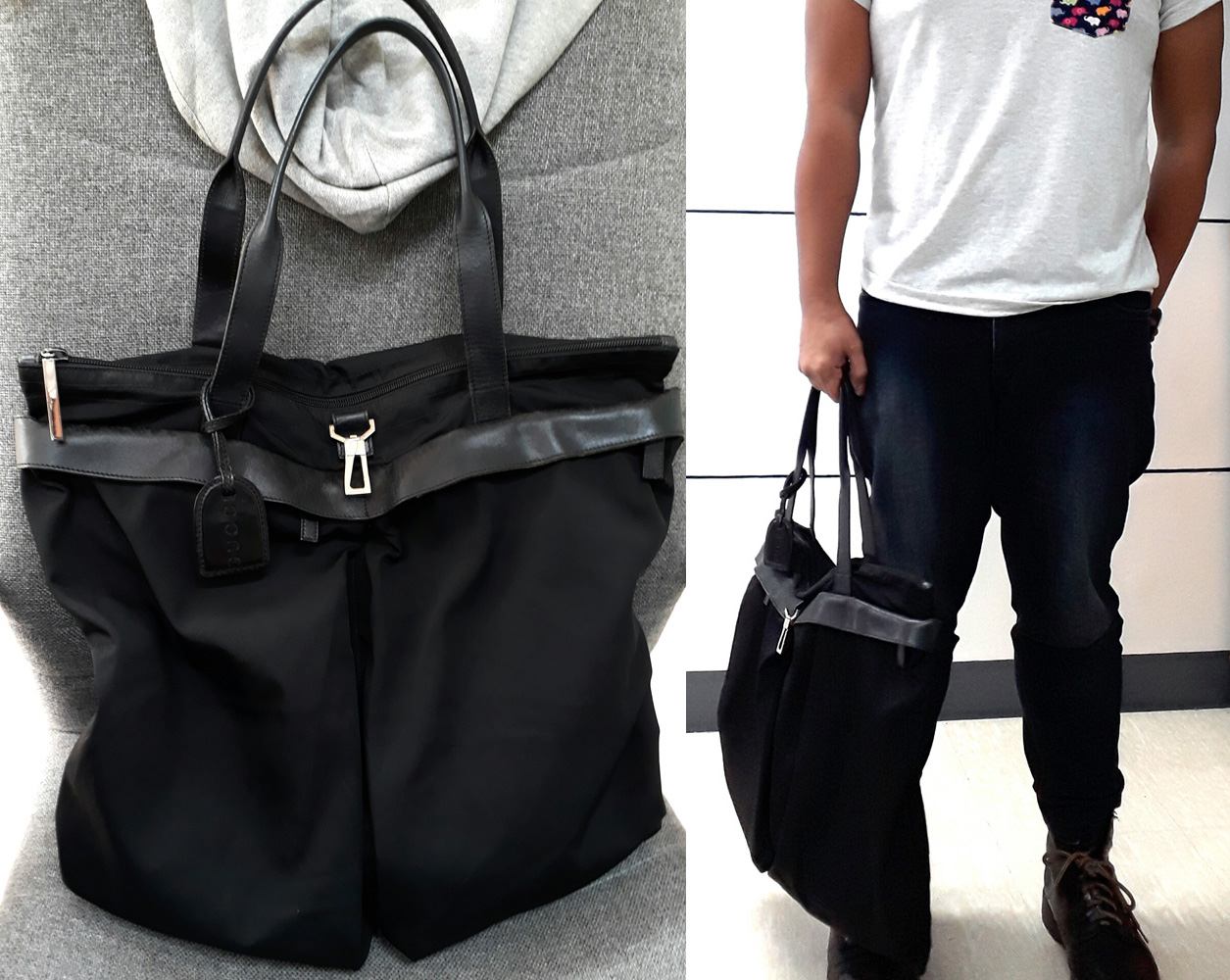 The silver hardware is reminiscent of the Gucci Jackie bags

END_OF_DOCUMENT_TOKEN_TO_BE_REPLACED

March 17 and I can finally say: HAPPY 28th BIRTHDAY MON! =D I was in the rooftop, with Mon, JB and my mother, testing my new telescope when the clock struck 12:00 AM! I had a hard time adjusting with the telescope, though, as the image was expectedly different than the other telescope. Newtonian telescopes produce images that are upside down, so it was difficult for me to deal with it on my first try. Unlike the other refractor, which produces images backwards, this Newtonian is not ideal for terrestrial use. LOL

Almost twelve hours after, I was woken up by JB because we were to eat our lunch. I was originally to help Mon with preparing lunch for today, but he did not bother waking me up at all. We bought a pack of frozen cream dory and other ingredients from Trinoma’s supermarket last night. Mon had fancied another bout of MasterChef moment and made a very nice meal for us. I especially loved the honey and lemon sauce on the cream dory, as well as the lychee in the jelly. He eventually left after lunch because he also had to spend time with his family on his birthday. =D 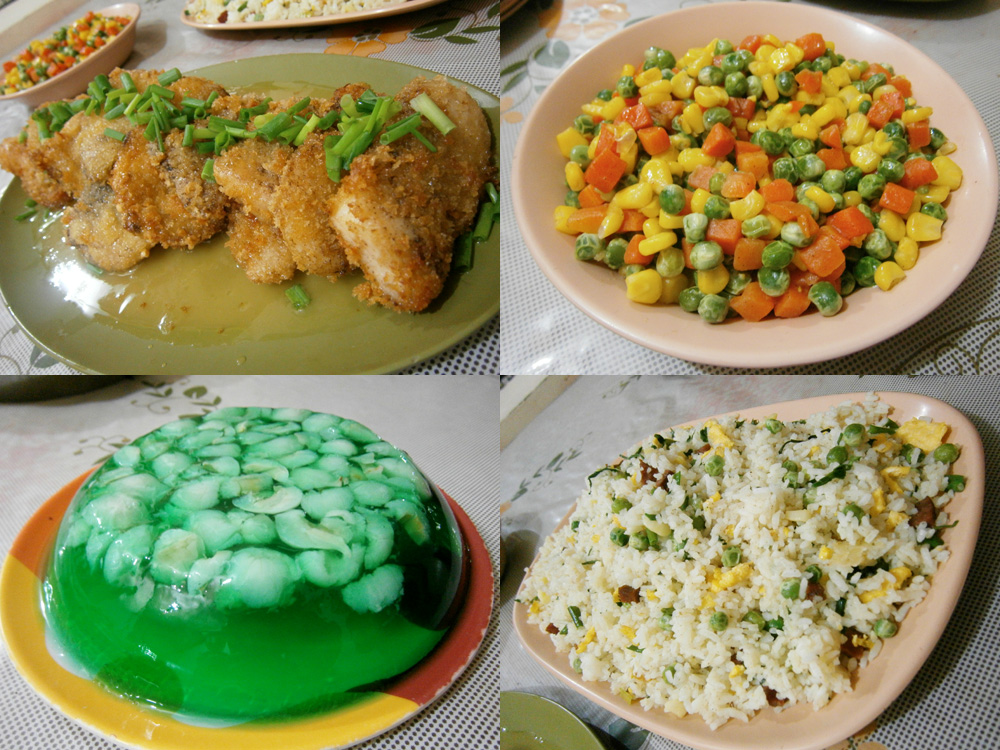 It was difficult to constantly bring the tripod of the telescope up to the rooftop, given the heavy counterweight, so the best solution I came up with was just to leave it in one corner. I would just remove the telescope tube, which wasn’t heavy at all. Thirty minutes before sunset, JB and I prepared our telescopes and cameras, hoping to get at least a momentary view of Comet PANSTARRS, but to no avail. Good thing that the Moon was visible to the northwest, near Jupiter and I was happy to point my telescope to these two celestial objects. 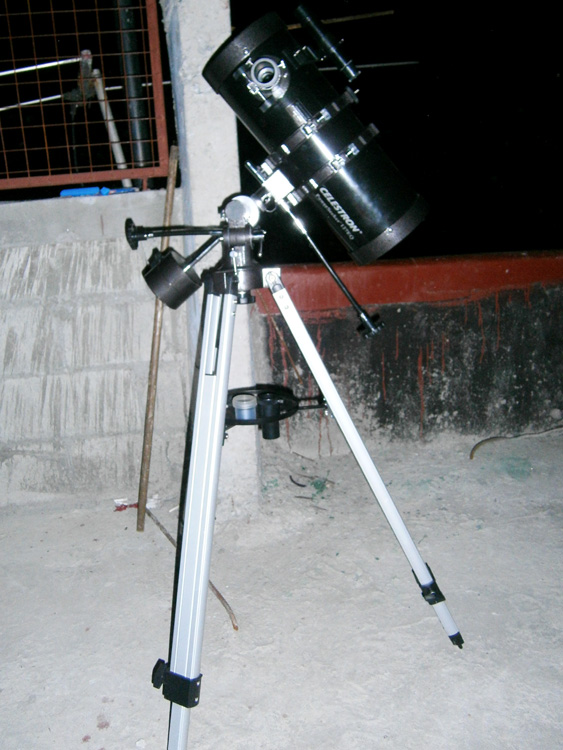 Of course, I also tried imaging the Moon with my point and shoot camera and I was delighted with the result. My camera, though, can’t capture the same beautiful thing seen from the telescope as the Moon’s details were more breathtaking as viewed from the eyepiece. I first tried using the 25mm eyepiece (originally from the Meade telescope), then the other 9mm. The picture below was seen through the 25mm one. 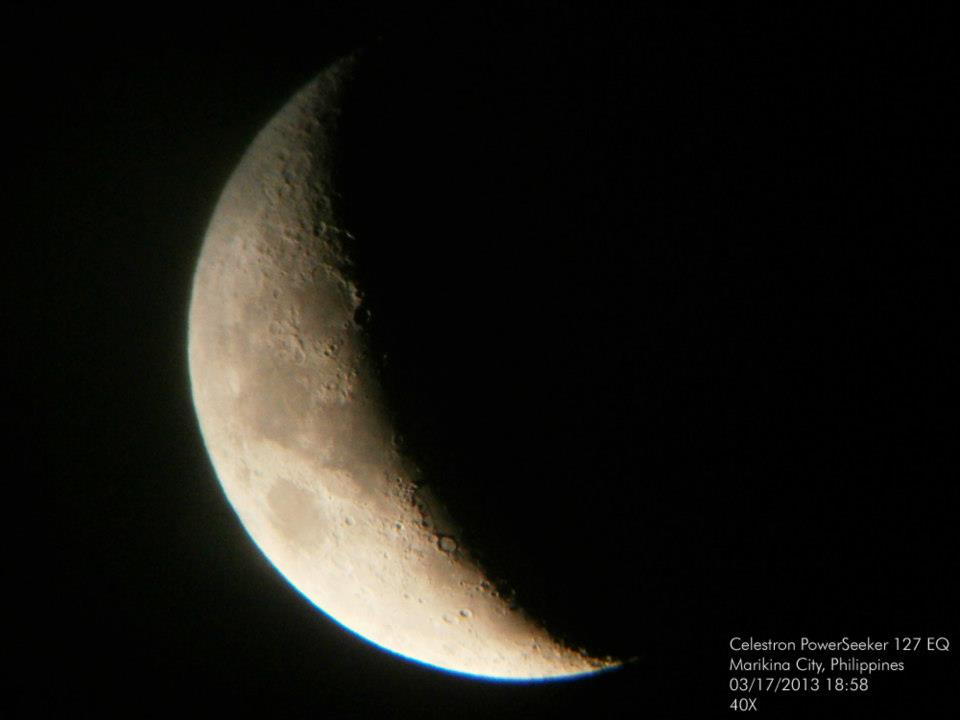 I also looked at Jupiter and it was beyond words! Given the bigger mirror of the Celestron, I was able to see Jupiter’s cloud bands as well as the Great Red Spot! With the Meade 70mm, I can barely discern these details and I usually half-guess whether I was seeing them. But using this 127mm, there was no mistaking the difference in the colors of the bands because of the better contrast. I attempted to image Jupiter but I can no longer push my point-and-shoot’s capabilities. All I got was a white blob with four dots (the Galilean moons). The next thing I might do is just purchase a CCD webcam and modify it for astrophotography because I don’t have enough budget for an SLR. LOL

Before wrapping up (because I had to eat dinner and take photos of things I will be listing on Ebay), I  turned my telescope to Orion and almost cried when I saw the Orion Nebula. Again, unlike my other telescope, I just saw a faint haze of light and cloud, which was the nebula. But with this new telescope, I was able to see a much better detail of the clouds and even distinctly see the ‘trapezium cluster’ of four stars! I’m still amazed of the Orion Nebula but I know I have to soon move to seeing other Messier objects. =)

No pun intended, but when I was checking Stellarium to check what was supposedly up in the heavens if it were not cloudy surprised me. I knew that the Moon was almost in West but I had an unexpected planet. Not to sound like Professor Trelawney on Lavander (“It is Uranus, my dear.”) but I really did not expect the planet because: 1) I was very sure that given my limited equipment, I will be having a hard time searching for it, and 2) IT WAS CLOUDY, so no use wasting my time. 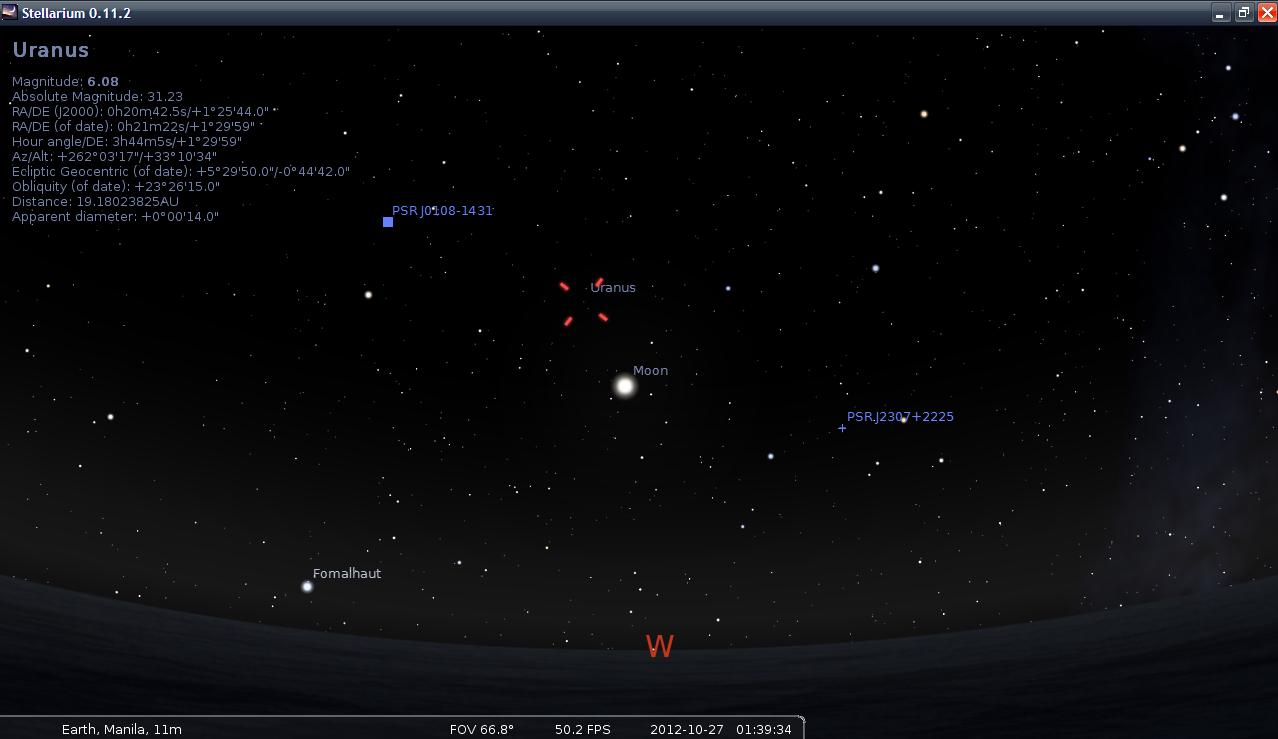 It stopped raining but there was zero visibility of whatever celestial object of interest. I have been hoping to try my luck with my brother’s bridge camera (a GE X500) because I saw other amateur astrophotographers having great luck with the ones they have. But given the current weather condition, I contented myself with playing with the dials/buttons that I don’t normally touch. 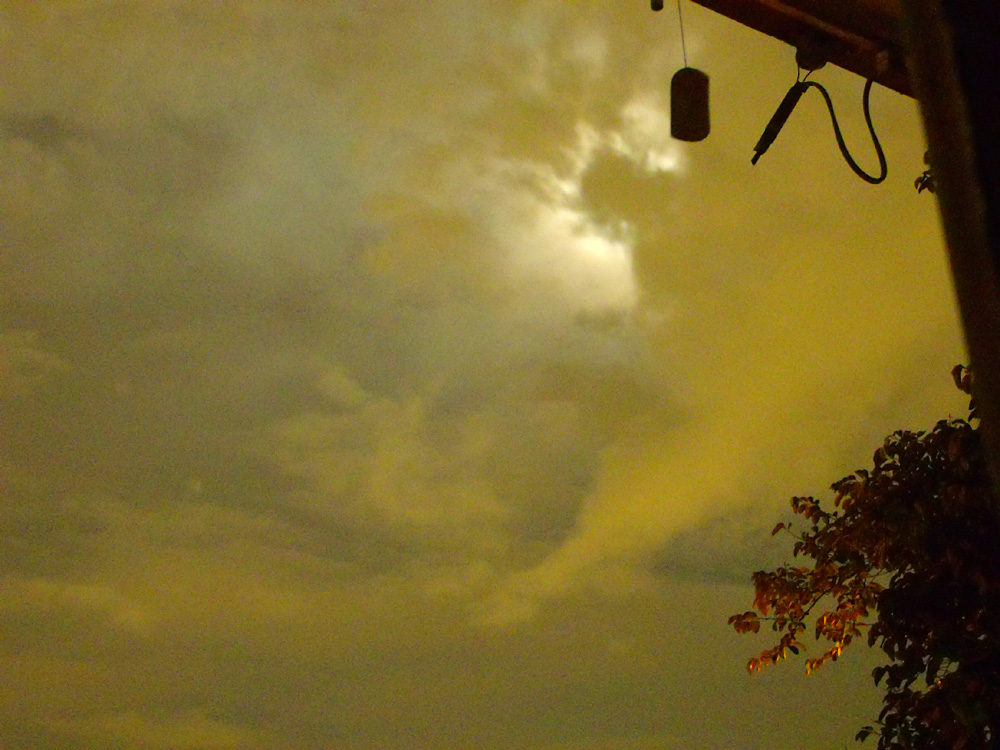 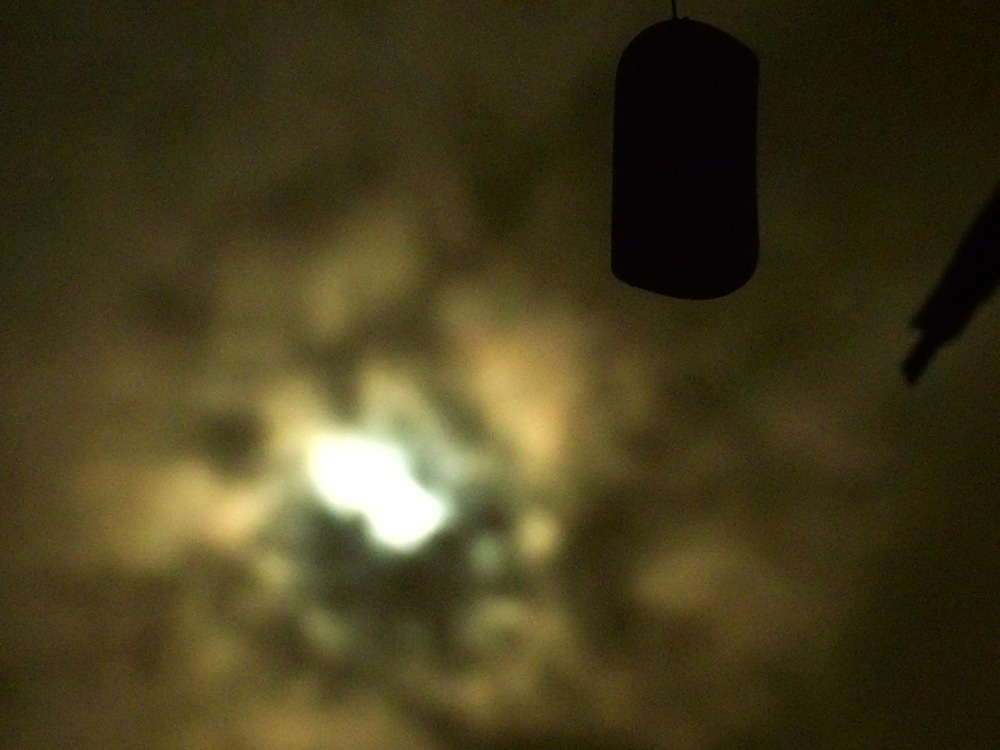 My jaw dropped because I did not expect the photos to look like that. It was honestly very dark in the room and very dark outside as well, and I can barely see any details of the clouds in the sky. LOL That was amazing. Now, I can’t wait for the skies to clear so I can try my luck photographing the Jupiter, Taurus and Orion grouping almost directly above around this time.

I’ve been ranting all afternoon about how much I want to buy another telescope — a more powerful one. I really want to do astrophotography but I’m on a budget. I originally wanted to buy a webcam with a CCD sensor, but since my brother has apparently ceased using his bridge camera, I can settle for it now. Back to the telescope question, I really want to research hard on which scope will best fit my needs. If only budget were not an issue. Anyway, I’ll just push what I currently have to the limit and hope for clear skies ahead!

Not literally. But since October 20, 2012 is Astronomy Day, I decided to take my telescope out after several months of being inside its box and look up to the heavens. Any amateur enthusiast or professional astronomer must do something astronom-ish for the night. LOL However, the wonderful clouds went in the way and I wasn’t able to see other things, except for the Moon. 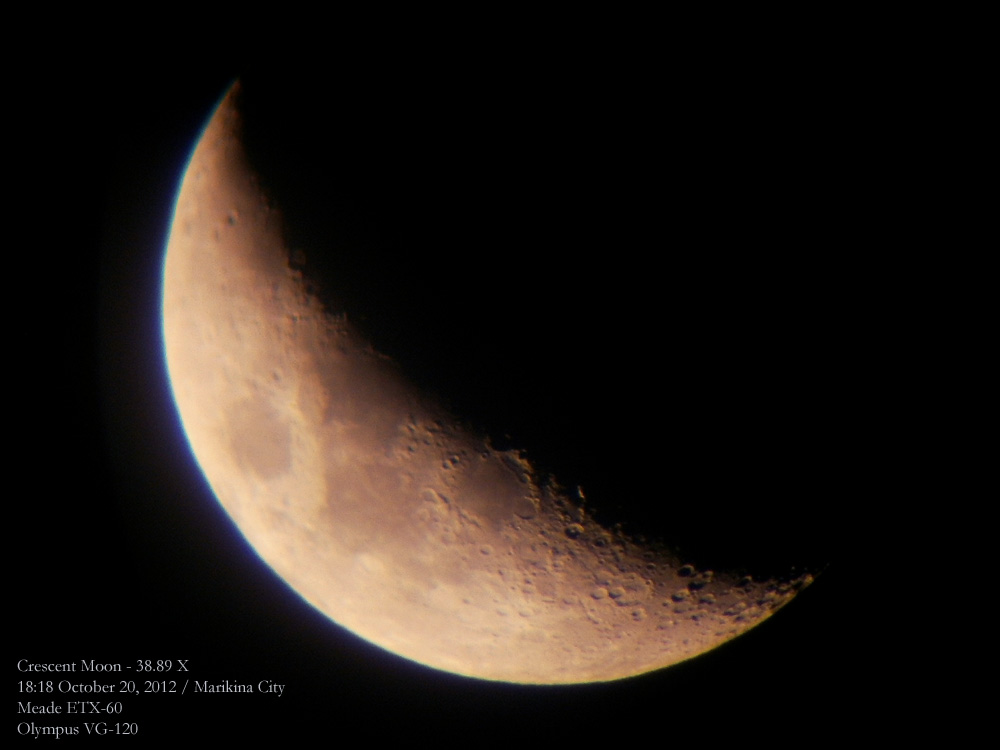 Don’t get me wrong. I am in LOVE with the Moon, but I was hoping to catch a glimpse of other celestial bodies. I took this photo of the moon almost half past six, and Jupiter wasn’t due until about  almost ten from where I was located. I borrowed my brother’s bridge camera, just to try my luck in capturing Jupiter, because I had been having a hard time with my point and shoot camera (which I used for the photo above — but I was also wondering why my photos using the same camera this time were not that good as before). As I went out of the house four hours after, I immediately saw Jupiter almost above me and unobstructed — perfect condition because it meant less turbulence in the atmosphere for my optics to penetrate through. But as I was already searching for it, first with the 25mm eyepiece, then with the 9mm eyepiece, I could no longer see it. Thanks to the clouds. Ugh. I was cursing under my breath, no, loudly and Mon had to remind me to lower my voice. We were in the middle of our street.

It’s no longer the rainy season but I just hope that those dense cloud formations would give way for me just to get a good glimpse of the Orion Nebula, Pleiades and Jupiter. >_<