END_OF_DOCUMENT_TOKEN_TO_BE_REPLACED

The month has barely changed from November to December and it was already our company’s yearend event a.k.a. Christmas party. On one hand, why was it so early? Other companies might not have even released their 13th month pay and yet we already had our party. On the other hand, I was quite delighted with the date because it meant less traffic and it would be easier to go to-and-from the venue. And for the first time after four years, I went to the party without Faye as she was still out of the country!

Mon and I were really pinching the penny because of our trip next week so we decided to keep our outfit simple. I was initially over the Moon with the supposed Yohji Yamamoto Pour Homme top that I was about to wear, but the cancellation of the transaction meant that I had only a day to look for something to wear. Then, why bother? Let’s just wear a similar shirt!

We have a knack for coordinating our outfits and the last time we did so was in 2010 during a ‘masquerade theme’ Christmas party.

Anyway, we traditionally invite a guest host every party (a celebrity) but this year, we invited two hosts. First was Rovilson Fernandez (from the ‘Amazing Race Asia’ fame, whose partner Marc Nelson has coincidentally hosted our party last, last year) and Joey Mead (current judge on ‘Asia’s Next Top Model’). Rovilson was unexpectedly funny because I thought that he’d end up being like Marc, who was eloquent, but lacking in the humor department. I had high expectations with Rovilson because Luis Manzano really carried the whole event last year, so the former had big shoes to fill and it was surprisingly well-done. As for Joey Mead, the girl was a goddess. My jaw dropped because I did not expect her to be that beautiful, and the girl can really walk. O_O

Anyway, more than the hosts, I had a great time seeing interesting looks from others who attended the party. There were several fashion contests/segments and there were two outfits that really caught my attention. The first one was a girl wearing a tuxedo and I think that it was an excellent take on Yves Saint Laurent’s ‘le smoking‘. What I loved most about it was the fact that she was not tall nor extremely skinny but she did not end up looking like a penguin. I was living for her! Her ensemble reminded me of one of Minzy’s (from 2NE1) look from the ‘Can’t Nobody‘ music video. And the second one was this, let’s admit it, costume and replica of Lady GaGa’s infamous red lace outfit from 2009 MTV VMA. I was not familiar with the candle thing but maybe GaGa carried something similar to that but the people went crazy when he got at the end of the runway and blew the flame off. Werq!

But I was more happy to see Mon go up the stage with his teammates, to accept an award recognizing their efforts. I really liked how he looked on stage with a leather jacket and white skinny jeans, together with that black shirt. I had been pitching to him the idea of wearing this leather jacket I personally intended to use for our trip to Seoul and he only agreed last minute before we left the house.

The food was great as well. I couldn’t remember who was the caterer last night but we had several trips back to the buffet table. I didn’t even care about dieting nor the fact that I was still drinking CarbTrim — let’s now see your efficacy! Unfortunately and unsurprisingly, I was unlucky with the raffle. I was so unlucky that my ticket number 1414 was almost picked several times. The numbers, 1412, 1413, 1415 and 1417 were picked out of the bowl, as well as 1424, 1434 and also 1484. Fate has to remind me again that I should work hard if I want something and not be dependent on luck.

To make matter worse, the committee in charge of the program had to drastically and deliberately delay the raffling off of the MacBooks. There was a band who sang non-stop for more than 30 minutes, as if it was a shaking-off medley to test the people waiting for the raffle. It actually worked because when they began drawing out stubs, a string of names had been called and the people were no longer present. It was literally a drawn out event that the whole thing had not finished until a little past 2 AM.

(The best picture that our crazy and energetic officemates can take, given the festive atmosphere)

I just dragged Mon to the ‘wall’ (or whatever you call it) because we haven’t had our picture taken with it. The raffle was almost over when we positioned ourselves to take pictures and we had to rush taking each others’ photos. We then ran out of the venue, a time-tested tactic of ours, to avoid the rush of people scrambling to go home.

We got home in about an hour, which was pretty fast, considering we went all the way to Marikina. I just felt a bit nauseous, maybe because of the glutton-fest that had happened a few hours back that I had to drink a can of pineapple juice. When I was already checking over my bag from last night, I was mortified to see that the bottle of alcohol inside had accidentally opened and spilled on the bottom of my Bayswater. >_< I was hoping it would dry off but as it has already happened last night, then the mark will most probably be permanent. Why haven’t I checked on it last night? I could have done something to prevent it. Big consolation: the liquid hasn’t penetrated the leather and the finishing/sheen from the outside was not affected.

All in all, the alcohol stain hasn’t dampened my spirit. I had a fun night even if that raffle has annoyed the hell out of me. 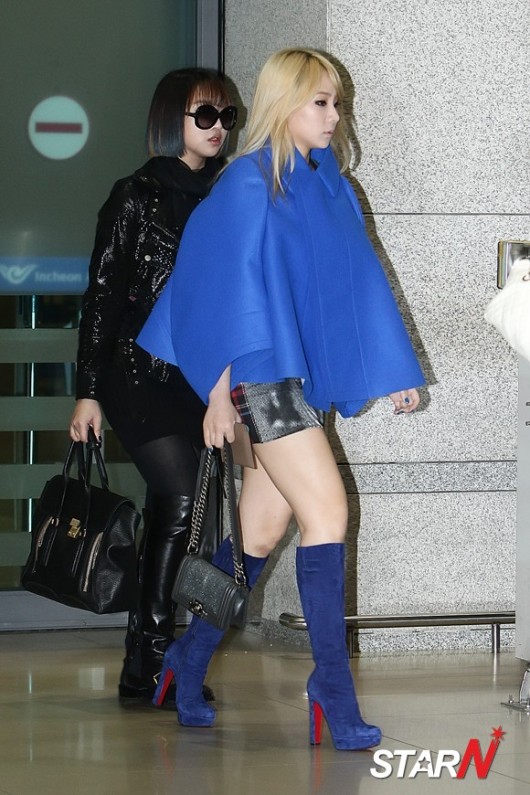 Airport fashion is always an interesting subject for me. Whenever celebrities travel, they can’t sartorially let their guard down because those hideous sweatpants may end up being ripped apart by the tabloids and netizens. So I was just browsing over 2NE1 pictures online when I saw their airport pictures the moment they touched down in Incheon International Airport almost a week ago. The first thing that punched me in the face was CL’s brightly-colored cape!

END_OF_DOCUMENT_TOKEN_TO_BE_REPLACED

When I get to the point of being saturated with lots of choices, I tend to just stick to what I love and be done with it. The same thing goes for music. I try to listen to lots of new talents, but I always love a specific artist because he/she/they already is/are the embodiment of that particular vibe in my books. For KPop, 2NE1 now remains to be the only group I genuinely care about. It is only then rightful for me to have my first KPop post about these girls!