Last weekend, I received three vintage magazines in the mail from my favorite seller: two US Vogue (February 1993 and April 1993) and an issue of American Photo March/April 1994. The third is a special one because it was dedicated to the great Avedon. 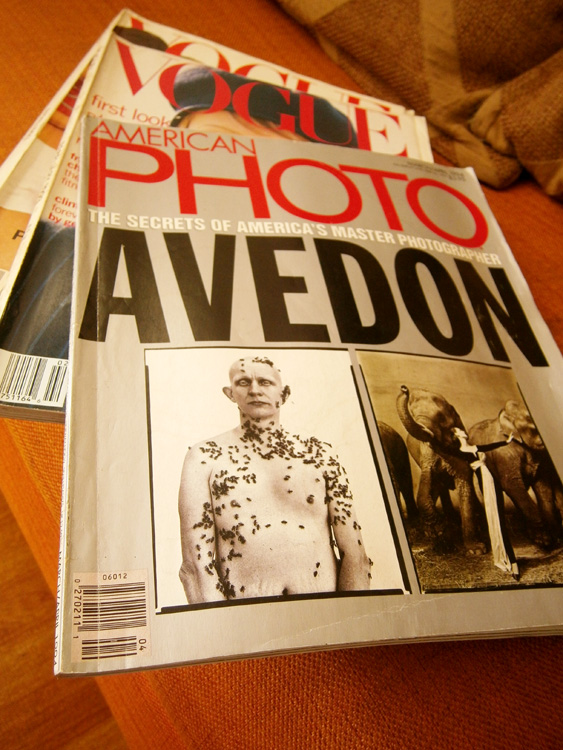 A whole issue dedicated to Richard Avedon: see the Diva (i.e. Dovima with the Elephants) wearing YSL for Christian Dior to the right? It is one of the top twenty most expensive photographs in history.

I can’t even remember when was the first time I’ve heard of his name, but I have a memory of his images from decades past.

When I first searched for Twiggy, Penelope Tree and Veruschka online, I found out much later on that most of their dreamy photographs were taken by Avedon. Twiggy’s headshot with those insanely long lashes, Penelope Tree with the black Halston dress with that ornate metal neck detail, and Veruschka in that epic Great Fur Caravan.

END_OF_DOCUMENT_TOKEN_TO_BE_REPLACED

Last Friday, I have paid for a vintage Christian Dior clutch bag via deposit to the bank account of the Ebay seller. I was hoping to get the item as early as possible, so I was relieved when she said that she’d be shipping it the following day. Normally, when a seller sends an item on a Saturday, I receive it the following Monday — I should know that because I’m also a seller and I know very well the shipping period of both JRS and Air21. 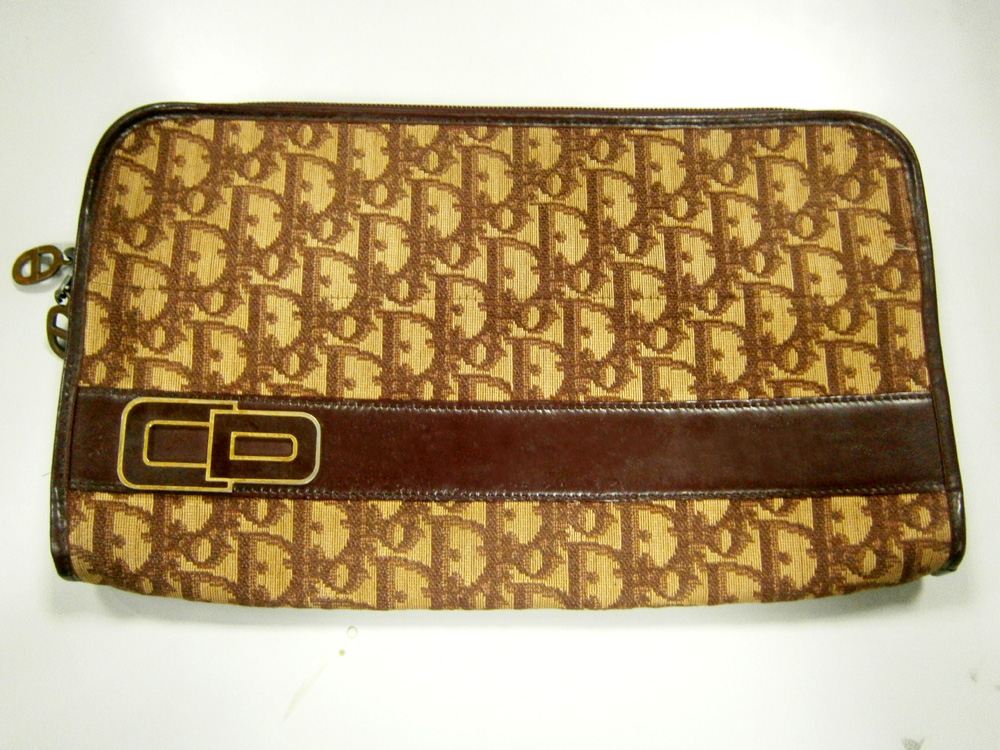 When Sunday came and I asked the seller for the tracking number, she said that she was not able to ship the item the day before as she ‘accidentally’ left it at home. I was slightly furious. The clutch was not meant for me, rather for Mon’s sister who will be using it for her prom. Besides, I can’t imagine myself using it at all. I was, then, still able to hold on to my promise not to buy a bag this year. ^_^

Anyway, I originally thought that Lot’s prom will take place last Tuesday but it was on Valentine’s Day, so the seller still has more time to send it. It was eventually sent on Monday so I thought it would arrive yesterday (a Tuesday). But it did not arrive until a few hours back and we can now breathe a sigh of relief.

When I first saw it for sale on Ebay, I was really enticed by it. Unlike Louis Vuitton and Gucci monograms, the Christian Dior one is less ubiquitous and not a lot of people associate such pattern to Dior items. Dior also did similar collections a decade ago, such as the Girly collection (often in pink, accompanied by white patent leather flower appliqués
) or the Rastafari line (with leather details in the Rastafarian colors of green, yellow and red). If I’m not mistaken, the one we got from Ebay was made way earlier, probably from the 90s. I have been eyeing this item for months already but I had no justification to get it. It was indeed a pretty, typical vintage Dior but the design is a bit too feminine for my taste. And then Mon mentioned that Lot will be attending her prom, her last prom before graduating high school, so I thought it will be a nice present to her, considering she passed the UPCAT. It was the perfect reason I was hoping for.

Most notably, the clutch instantly reminded me of that SATC episode (i.e. ‘To Market, To Market”) where Carrie was running late to go to the New York Stock Exchange and ring the bell as their newspaper had gone public. Rushing from the door, to the cab, and entering the building, I instantly recognized that she was carrying a vintage Dior bag. However, the one that she had was a convertible bag — it folds in half as a clutch, then unfold to show a handle for an open tote bag. It was very nifty and versatile. 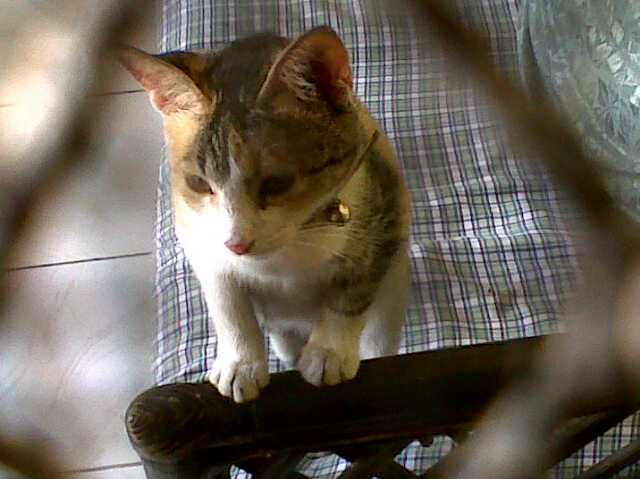 On a different note, Mon’s adoptive kitty we named Bommie (guess the provenance of such name? LOL) gave birth to three beautiful kittens this afternoon! Since last night when Mon got home from work, he noticed that Bommie had been very agitated and constantly moving from one place to another. Then this morning, she was really having a hard time, constantly lying down and raising her leg. Mon even momentarily got a glimpse of her tummy ‘rippling’. They realized she was on labor and most probably be giving birth a few hours later. 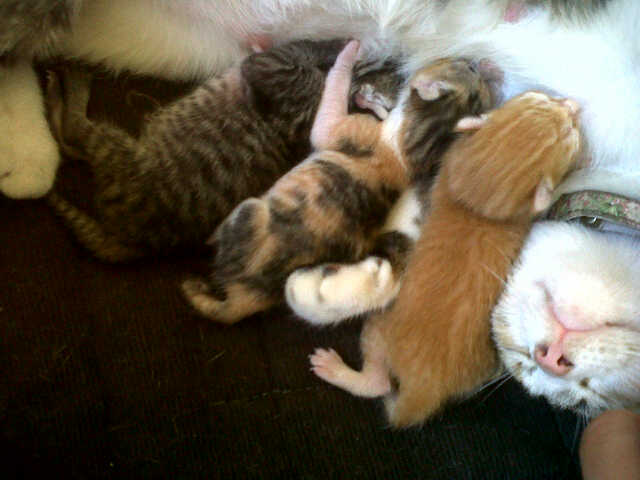 We had bought our dinner at around 7:00 PM and Mon got a message after from his mom, telling him that Bommie already gave birth. All three of them were fortunately
alive and in good condition, as most cats giving birth for the first time usually have some difficulty in delivery. One of the kittens totally took after Bommie’s fur, while the other two ‘sampled’ a particular shade. They were so tiny and fragile, but still amazing looking. Just imagine, a few hours ago, they were rippling inside their mother’s tummy and now they are finally out! I told Mon that I can finally recite my favorite ‘Three Little Kittens’ lines and can actually put on miniature mittens on these three. That will be extremely cute to look at! Well done, Bommie! 😀

It has been three weeks since I last wrote a post regarding our trip to Seoul, and it did not help that this post concerned two things that made me unenthusiastic: Lotte World and leaving South Korea. From Simone Handbag Museum, we took the traingfrom Sinsa Station going to Jamsil station, which is connected directly to Lotte World. 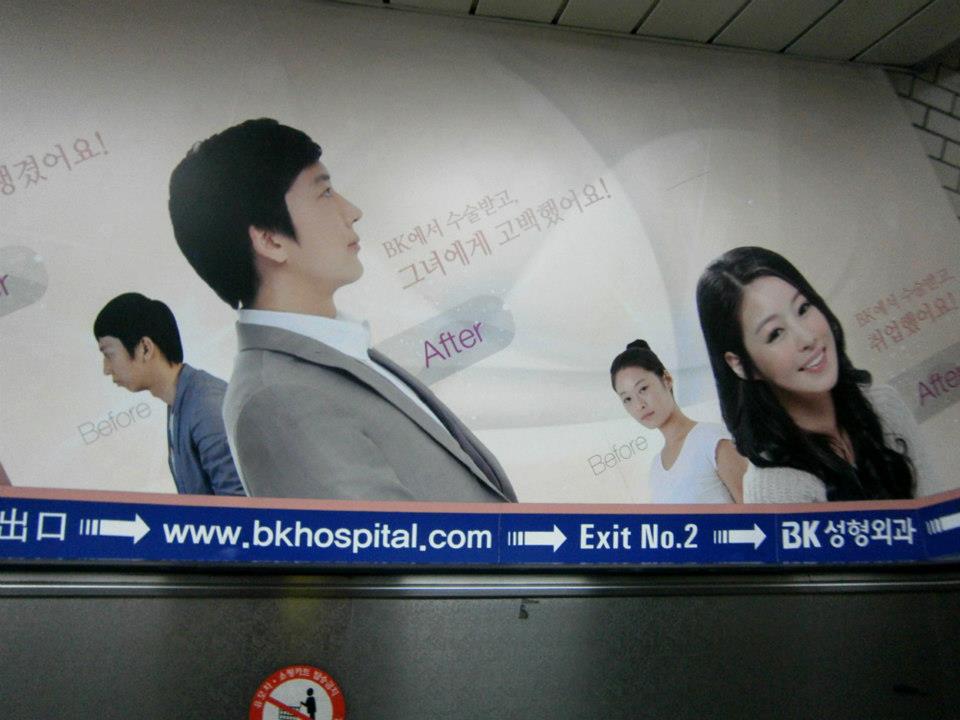 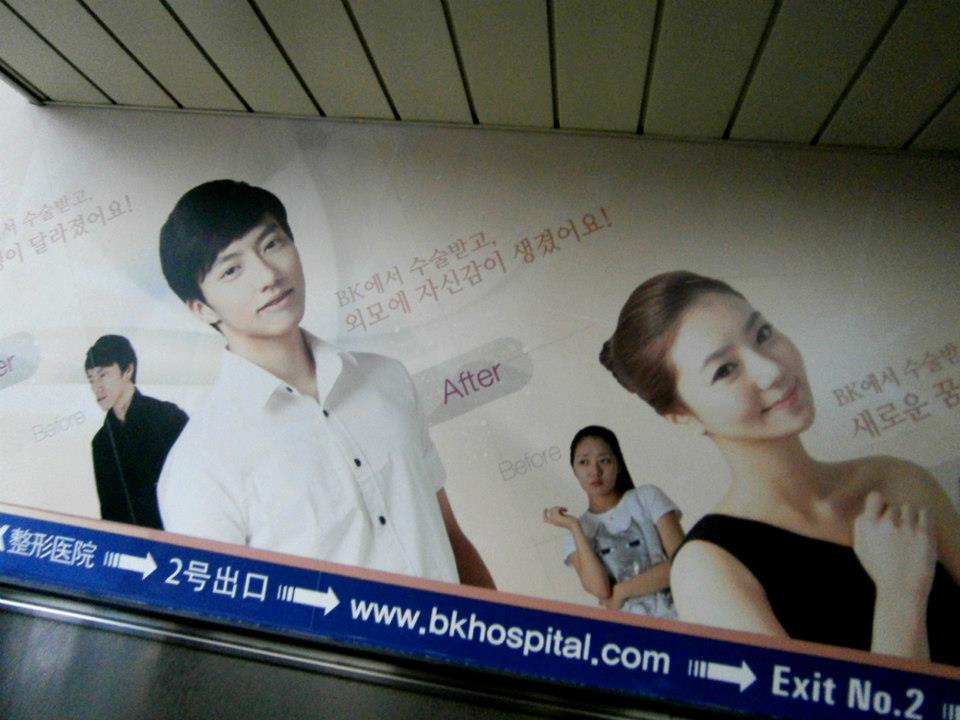 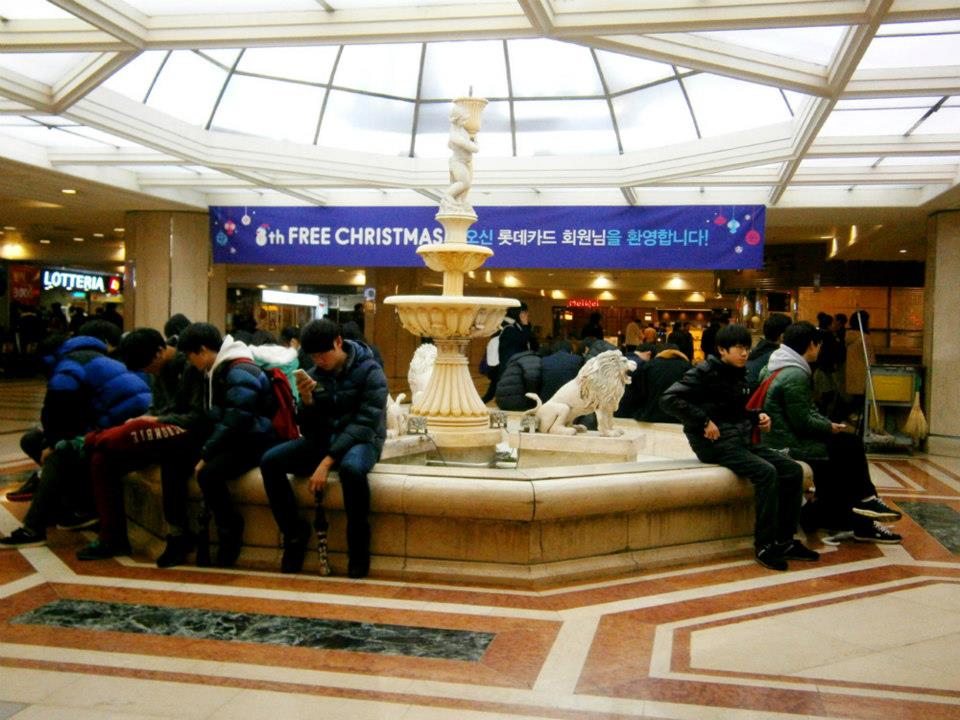 Fountain with people sitting around it

END_OF_DOCUMENT_TOKEN_TO_BE_REPLACED

For our last day in Seoul, we already have our itinerary in set and it was non-negotiable for us not to go to one of my must-see places. Back in October 2012, I previously expressed my anticipation of visiting Simone Handbag Museum and I could not believe that I finally had the chance to go and visit it. It was very uncommon for tourists to include a bag museum to their travel itineraries but I consider it a sin for sort-of bag lovers like myself not to drop by when in Seoul. So from Myeongdong Station, we travelled all the way to Sinsa station in the upscale Gangnam-gu to visit the museum (directions to this place can be found at the end of this post). 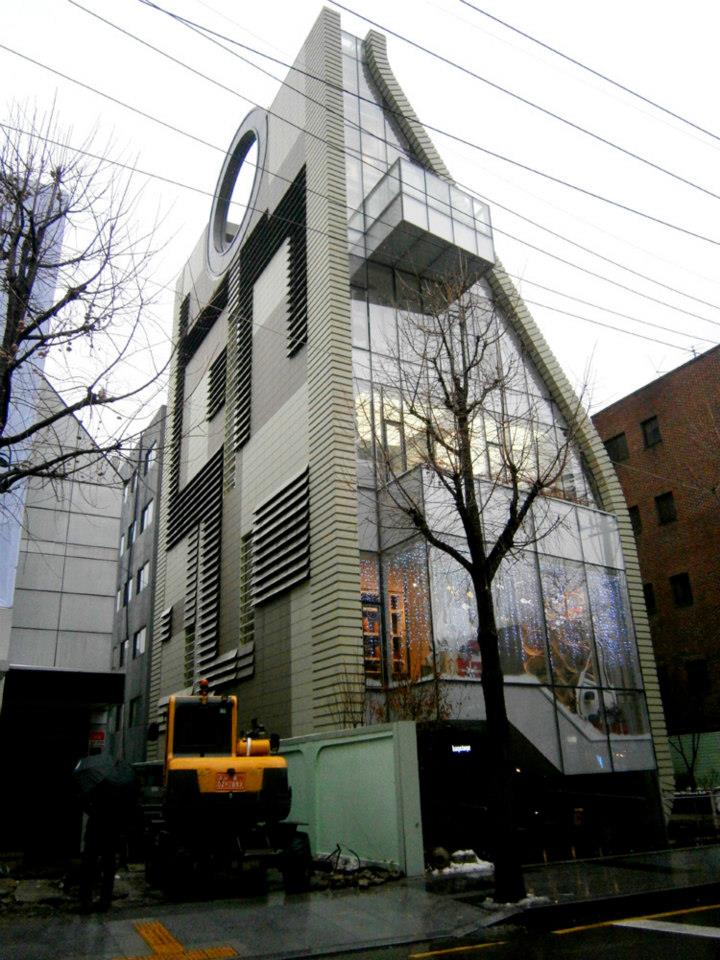 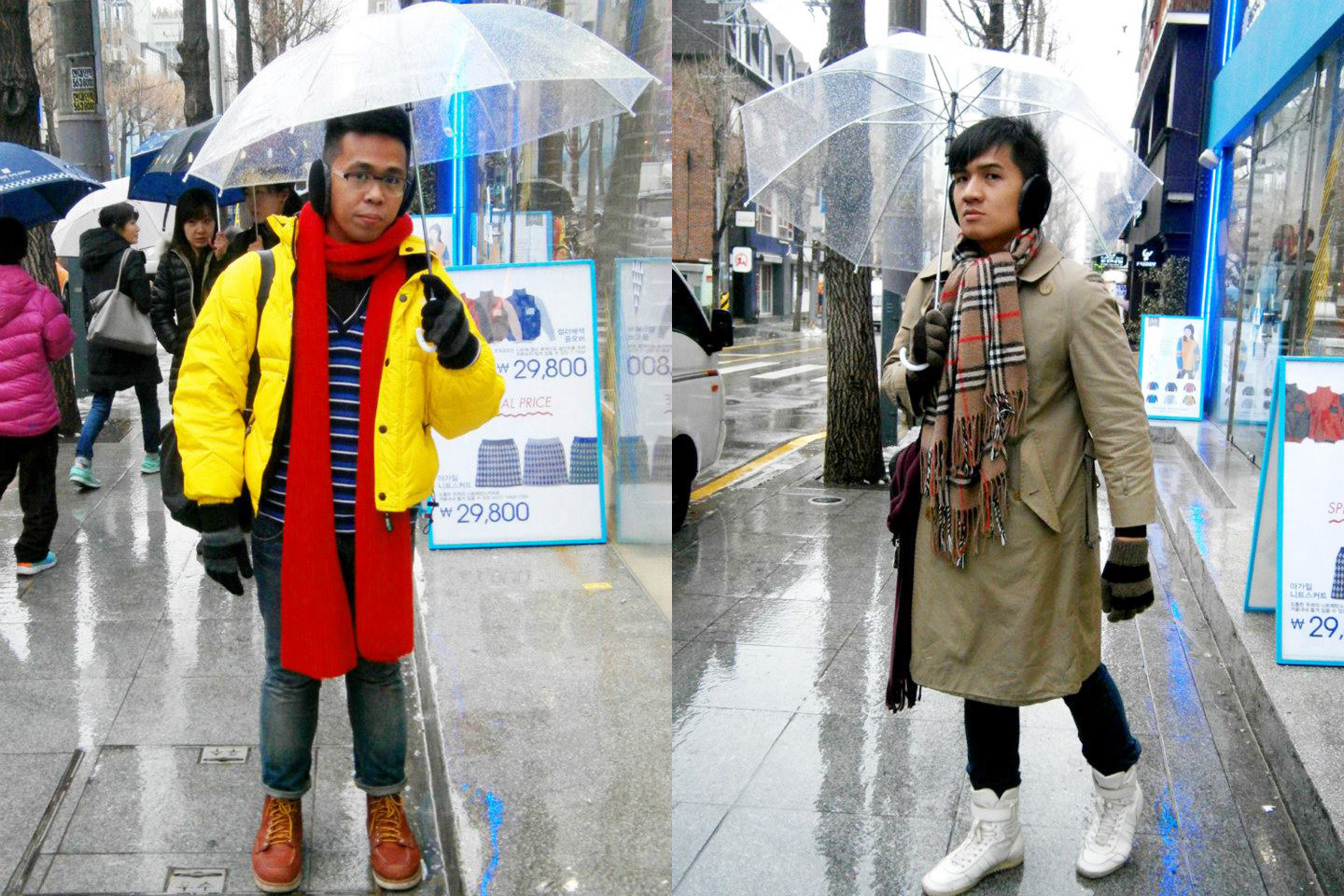 Rainy winter – me on the bright side, while Mon in his neutral ensemble —- and I love our transparent umbrellas we bought for only KRW 3,500!