So, today marks 5Y2M and we had a perfect excuse to finally watch Thor: The Dark World ! We booked our seats online but I just realized upon claiming the tickets that there was no need to reserve them. It was senior citizen day and we were queueing next to excited elderlies who were either watching Thor with us, or a Filipino horror movie. I just felt bad for the unnecessary Php 40 admin fees we paid.

Before the movie played, I was not too crazy over the new Captain America trailer. It was too ‘boys night out’ and not enough fantasy for my liking. As for the movie itself, I was so happy that Kat Dennings got too have more screentime than the first installment. I have always loved her in Two Broke Girls and I also recently watched the ‘Hot Child in the City‘ episode of SATC, where she was this filthy-mouthed adoloscent schooling Samantha. I have always loved Natalie Portman but Kat Dennings stole the show with her comedic timing and sarcasm. There was also the usual gratuitous scene of Thor for the girls and the girls-at-heart, and lots of smashing of extraterrestials. Anyway, it was an awesome movie, thanks in large part to the right humorous parts inserted here and there. I knew I would be laughing while watching this movie because the first movie pretty much made me expect it. I can’t comment on the length because it was almost the same as the other MARVEL movies, but several of the people who watched with us clearly dozed off. Bless them.

END_OF_DOCUMENT_TOKEN_TO_BE_REPLACED

We waited for the clock to strike 12:00 AM last night and the kids were more excited than the rest of us. Barely days when we searched for their gifts, they just tore the wrapper off and I was personally delighted to see their happy faces. There was a time when we were not so used to celebrating Christmas this much because my siblings and I were all grown up already and my parents were both out of the country. But the previous years until now when we already have little kids at home, my mother make it a point to make them feel excited for Christmas.

Anyway, Mon went to our house for Christmas and he was with his little sister, Lot. The last time we saw each other was during Big Bang’s concert last October here in Manila. It was her first time visiting our house and she was excited and nervous at the same time. I think she had a great time as she had a good time playing with my niece, who normally does not click right away with new people.

Anyway, it took them a longer time travelling than staying at out house. The traffic in Metro Manila was crazy and it was quite difficult getting from one place to another. We had a 7:35 PM movie to catch in Gateway Mall (‘Sosy Problems”) and we arrived slightly late for the movie because it was already the opening credits. We then went to Taco Bell to have a quick snack and Krispy Kreme to buy some donuts for both of them to take home. 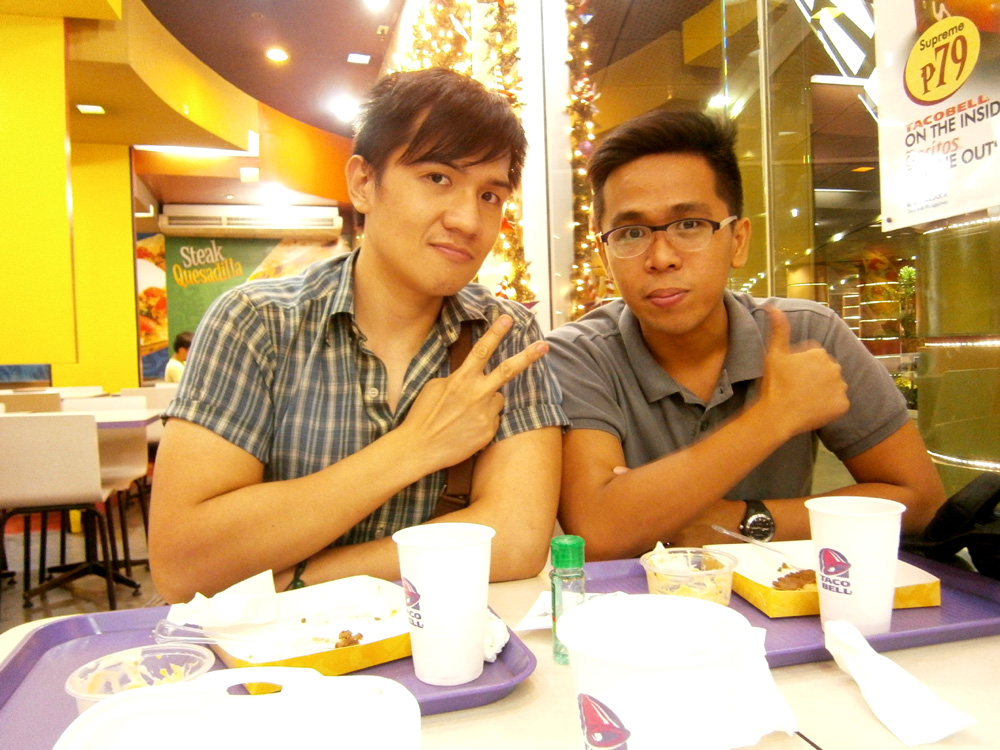 I got home pretty fast and Mon kept on asking me whether I already went up to my room. I had no inkling that something was waiting for me because I stayed quite longer downstairs where all of them (except Brie) was still awake. When I reached my room, I gave a loud laugh when I saw this:

For the first time ever, I gave him a card/wrote him a letter, which I gave to him last Sunday before he went home with a “DO NOT OPEN UNTIL CHRISTMAS” note on the flap closure. =P I was so used to him giving me such for more than four years already, and to think I just gave him my FIRST EVER was extremely shameful. Well, there’s always a first time for everything. I surely gave him more of a surprise than me receiving a card from him. Never too late.

It’s almost 12:00 AM again and I want to end this Christmas day by exclaiming how happy I am to be with the people I love. Christmas is always a good reminder of the meaning of family and close relations. And yeah, giving as well.

I didn’t know about the difference between the two, not until three years ago. =D Anyway, I posted and emailed the exact thing to my friends moments ago. Our attempt at a “greeting card” and a “White Christmas” to boot! =D Nami Island was an amazing place for this, albeit it was extremely cold and we had to cover our faces and ears! It is currently 9:17 PM here in Manila (well, it’s already 25 in New Zealand anyway) but regardless, I still wanted to say HAPPY HOLIDAYS EVERYONE!

Yesterday, Mon and I were ready to face the daunting task — Christmas shopping on the last Saturday before Christmas. On our way to Trinoma, we were already discussing and making a list on our cellphone the things we need to buy for our loved ones and godchildren. I technically have six godkids but as only two were present (one’s already grown up, while the others: M.I.A.), I only had to buy two.

First stop was by the Barbie store in the second floor and I was able to finish choosing the items I wanted to buy within the first five minutes. Mon, on the other hand, had a hard time choosing what clothes to buy for my niece, Brie, who happened to be his goddaughter. Next stop was Toys R’ Us. We had a longer time looking and deciding for what toys to buy for the other kids. Towards the end of our shopping, though, we decided that it would be much better if one of us would get in line already while the other search for other last minute purchases.

Well since I was already done with my things-to-buy list in this store, Mon had to run around and look for other toys to give to his godchildren. Again, the queue was insane and bladder-challenging. The lady in front of me asked me if I can hold her position in the line ‘for a moment’ because she had to rush and get something. I gave a non-committal “Yes.” with a blank look, so she’d rush as I did not entirely feel comfortable doing it for her. And I was right. I don’t know about other people but if  I said that I’d hurry up to pick something, it will be for a minute or two just to snatch whatever it was that I have forgotten. The lady in question, however, took a long time to get back on the line. She’d passed by my side, walking back and forth, and Mon even said that she was talking to somebody on the phone, while choosing for things on a shelf. O_O Had I known that such practice was okay, I could have fallen in line the moment I enter the store, ask the person next to me to hold my position, do my shopping and come back just in time to pay. =P Needless to say, she did not have her position back because… uhmmm… I did something interesting.

Going to the gift wrapping section of the store (because they wrap gifts for free as long as an item costs Php 300 or more), we were shocked to hear that the waiting time was six hours! Wow! That was a long time to wait just to have your gifts wrapped. But it was understandable, though. You can clearly see in their counter that the area was brimming with toys. They were literally slaving away and I hoped that other customers won’t give them a hard time because moments before, a cranky lady was throwing a fit in the cashier. Bless her little heart. Anyway, we had a lot of time in our hands since it was still 3:30 PM when we finished our toy shopping. We looked for gifts for the grown-ups and had a 6:30 PM screening of ‘The Hobbit: An Unexpected Journey”. So 9:30 PM just flew by fast.

After the movie, we went back to Toys R’ Us to claim the wrapped items. I think they had barely finished wrapping the gifts, and there was still a long line of customers waiting to have their items considered. When will they get their gifts? The following day? Most of them got discouraged and just asked for the free gift wrapper.

Coming from Trinoma, we ‘flew’ immediately back at home to freshen up a bit because we were to meet some of my high school friends, one of them was Chelli, who I unexpectedly met when eating in Mashitta almost two months ago. Spent until 2:00 AM talking and laughing our heads off over the funny and foolish anecdotes we had from high school until present day. Then today (or few hours ago), I just came from another get-together of high school friends in Jannet’s house. Only five came again and we could have all gotten together on a single day but alas, their schedules did not match and they already have prior commitments. I had to go to Jannet’s place, though, because I needed to hand out my gift for his son and my godson, Aleph.

Tomorrow will be a very relaxed day. I intend to just eat and drink and sample the cooking of my mother for our Noche Buena. Perhaps catch up with with niece and nephew, and give my dog a bath. =P Barely two days before Christmas and I can’t wait until the kids open their gifts. We’ve been annoying JB since this morning that he will be receiving pick-up sticks as a gift. He had no idea that I have just given him his first toy telescope, so that he won’t bug me to go outside and lug my heavy telescope just to go stargazing. Well, he did nit initially know about it because when he was enumerating the possible content of the box (prior to me telling him that it was pick-up sticks), he said “small telescope” and we were all dumbfounded. =D

Oh Christmas. So stressful, especially to the wallet but I know it will be worth it. =D I missed nobody on my list and I was very happy.