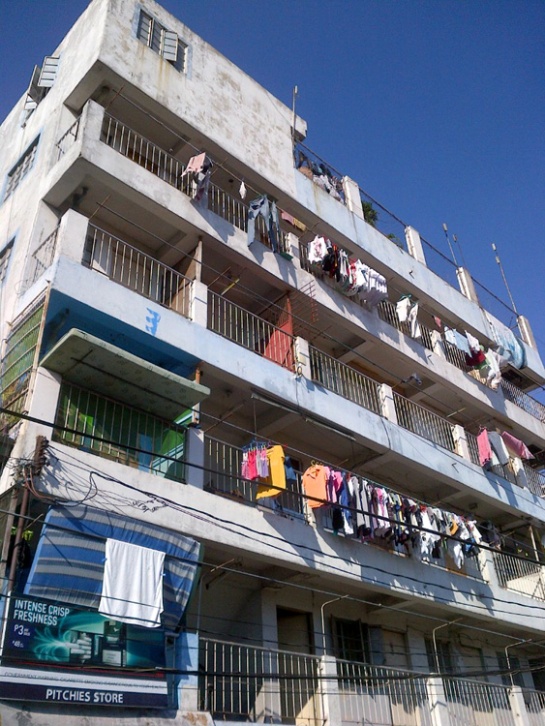 After transferring another batch of stuff to our future apartment, we went straight to Faye’s place. Her things were all ready to go, but the movers came in half an hour late. It was no joke lifting her things from the rooftop of the building (i.e. 6th floor) down to the truck. We should have had a weigh-in just to check the weight loss incurred from the task. =P After two hours, we were done carrying all her five-year worth of things up to her swanky, new apartment. *wolf-whistles* It was a very nice place and she no longer has any excuse not to exercise and cook fancy meals because of that Martha Stewart kitchen top.

While we were munching potato chips and giving ourselves time to breathe, Faye received a text message from Charm: Mon and I were to attend 2NE1’s concert as well! It was like a jolt of defibrillator and we were jerked from our seats, exclaiming in utmost joy over the best news of the day. I couldn’t believe we’d all be watching the show! ^_^ We only had about half an hour, though, to freshen up and get ready for this event. I also had a cramming session listening to 2NE1’s songs from their new album, because I deliberately avoided their new material. I knew even from months ago that there was a very slim chance of me attending their concert. With all the responsibilities since getting out of the hospital, dishing out some dough for a concert would be largely unwise. Besides, it was mandatory for Mon and I to transfer places before the rainy season, so I just psyched myself over the task of packing to forget the concert. But in less than 24 hours, our fates have instantaneously changed and it almost made me cry.

I forced myself to forget the unfortunate cab ride going to SM MOA Arena. And like a Jennifer Lopez song, I told myself that not one thing could bring me down, and the nothing in this world’s going to turn me around.LOL Faye, Jihan and Charm arrived ahead of us, and the latter was still waiting for a couple of people to give out tickets to. And speaking of tickets, Mon and I were speculating inside the taxi on where we’d be possibly seating. I was just hoping it would not be General Admission, and Upper Box was not shabby at all. And as if the news of us attending the concert hours back was not the best one ever, the two of us screamed in delight to hear we have VIP tickets! I was gobsmacked! 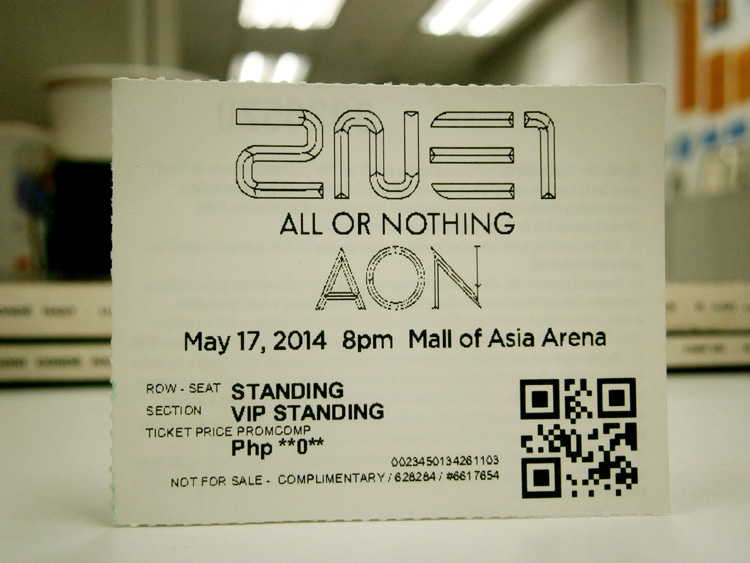 VIP tickets for 2NE1’s All or Nothing concert @Php0! Thanks to Charm fabuleuse!

The show was technically already starting when we got inside. But as we needed sustenance, it was natural for us to stop by the snack station unless we’d faint in the crowd. It would be about 2 hours of standing and getting squished in front of the stage. Have I already mentioned we were in front of the stage? ^_^ And after a brief countdown from 10 to 1, I thought something exploded (well, there were probably some fireworks) but the noise was really deafening. The girls emerged on stage clad in glittery, military inspired garb. Somebody pinch me. They were just a couple of meters away from us! They started their show with one of their new songs ‘Crush’, which I only wholly-listened to few hours ago. But I did not care. The whole point of attending events like this one is to let your hair down and have fun. I was too emotional about it and began crying. It was a surreal feeling. Months ago, I just imagined attending their concert and it was finally happening.

And the show started! 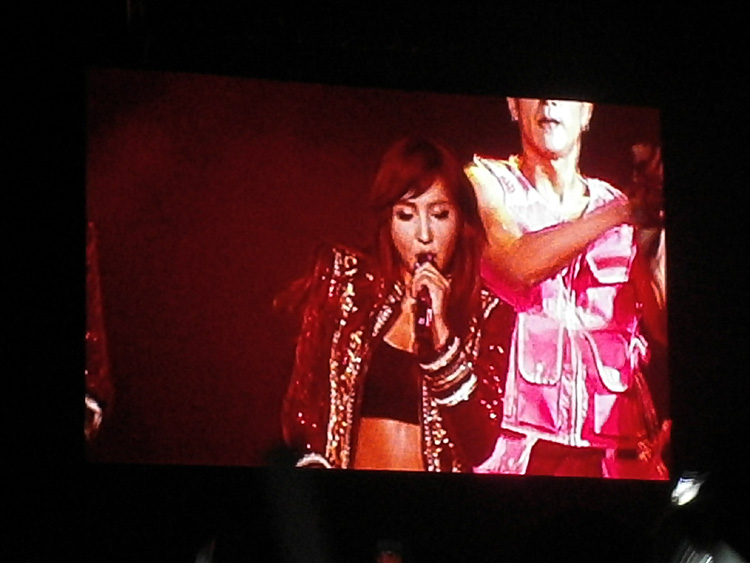 Minzy all grown up now

Since I’ve got no idea about the set list of the concert and had never bothered to look online on what gimmick they had in store, I was very happy to see them hanging on those Moulin Rouge-ish swings on their next costume change. The most amazing things were CL’s black and white coat and Sandara’s wide-brimmed hat. Quite disappointed with Minzy’s styling as she was almost always in pants and jackets. But what do we expect, she’s always wearing the same things just in different colors. 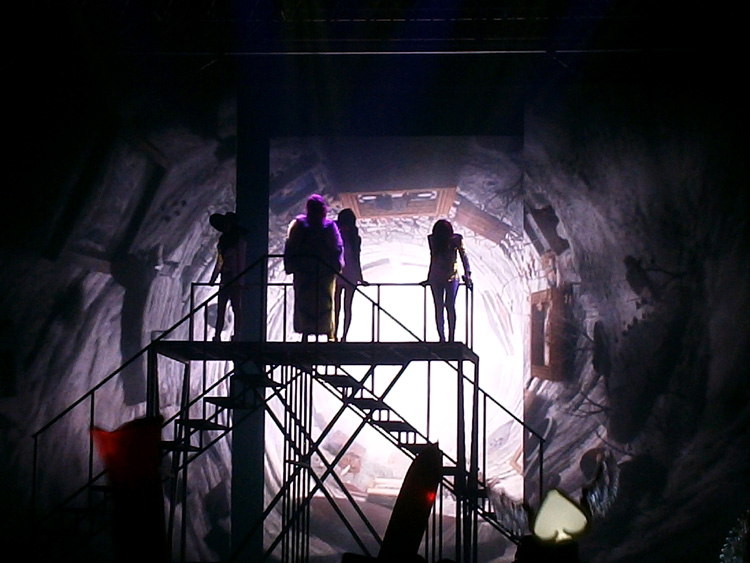 Silhouetted against the light

When we were still outside the Arena, Mon mentioned that the ‘winner’ would be performing as well. At first, I thought that there was some kind of online contest conducted by YG Entertainment and whoever wins would join the girls for an intermission number. Turned out that Winner was actually a new boyband by YG. LOL I am no longer in the loop over new things in the KPop world, so it was no surprise that I had no idea about who they were. It was evident, though, that majority of the people watching the concert were in full anticipation of this group. I still felt a slight ringing in my ears even after they left the stage. However, I was full on in love with their styling. Except with the guy in the printed shirt, everybody nailed their Yohji Yamamoto game with the over-sized, button-up shirts. 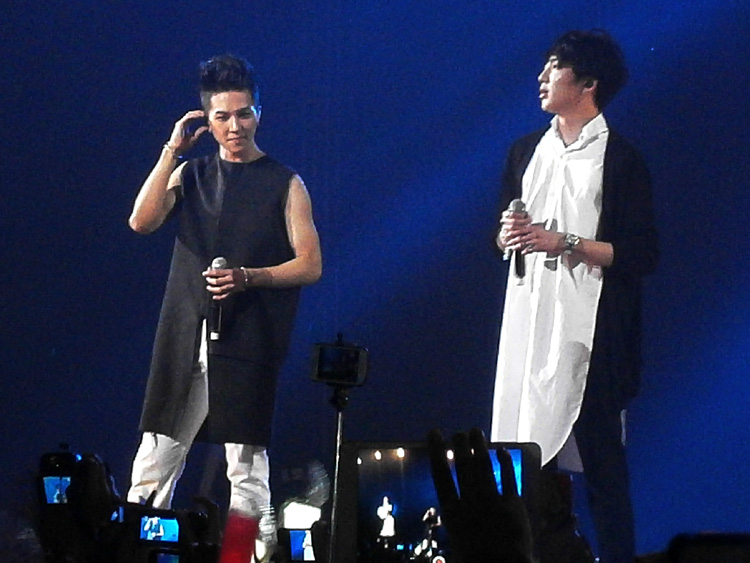 The stage design might not be as complicated as Big Bang’s concert from almost two years ago, but the lights and production in general was definitely a lot better. Maybe because we were a lot closer to the performers this time, and this could potentially cloud my judgment (plus it’s 2NE1, hello!) but I loved everything about this concert. It was no joke standing and getting squished by people, and it was a perfect experiment of Darwin’s ‘survival of the fittest’. We found ourselves inching closer and closer to the stage, as more people were trying to get out of harm’s way, unable to withstand the pressure of a hundred people pushing from behind. We might have moved a couple of meters from where we were standing when we originally entered the floor. Faye and Jihan were extra lucky to get much farther than the three of us.

The crazy crowd during the concert (click to zoom) 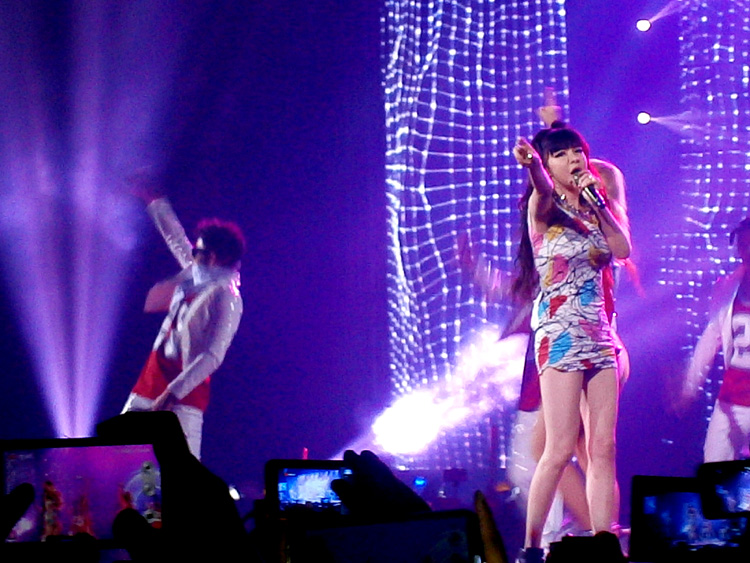 Minzy was probably sweating like a pig in that pink, patent leather jacket

I have a love/hate relationship with CL. When they debuted five years ago, she was the one I first liked the most, particularly with that chair dance in their debut intro for the live performance of ‘Fire’. But over the years, she was being a bit too Beyoncé for my liking and I already crossed the fence towards Bom during their third (or was it fourth?) live performance (i.e. the one with the forest of fluorescent lights, with Bom looking like a Flintstone LOL). Anyway, seeing CL’s solo performance pulled me into her wagon again — girlfriend was on fire, naturally charismatic and had a commanding presence.

CL during her solo

Towards the end of the first set, they were already wearing coordinated SAM MC London outfits. To be frank, I’m not too fond of them. As much as I am not a fan of Jeremy Scott, it would have been nice to see them wear something more eye-catching on stage for the final run. But whatever. They might have already reached their glitter quota when they first went out on stage. 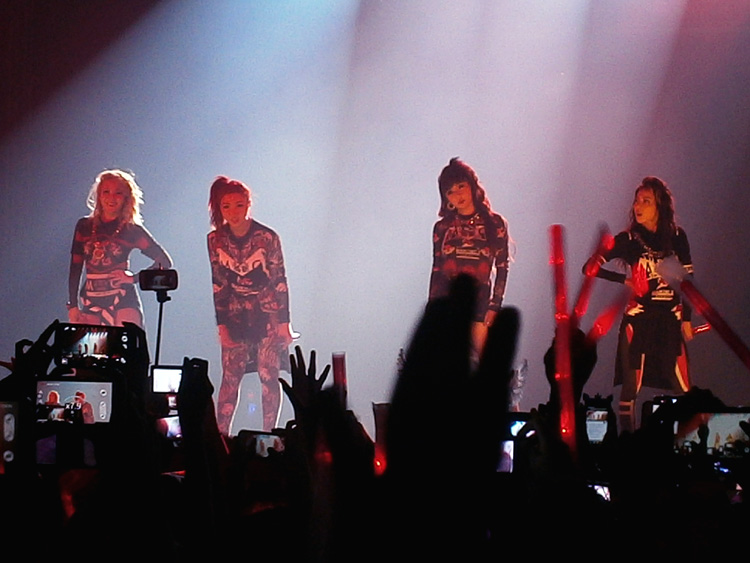 Quite a dramatic shot of the girls

The lights dimmed and then the crowd began chanting for the girls to go back on stage. At this point, Faye, Jihan and Charm already went out of the venue, too tired and with old-age catching up. Just kidding! =D Of course, there’d be an encore performance and the 2NE1 girls were wearing those Jeremy Scott for Adidas wing dollar track pants. Something comfortable for a change. Two cakes appeared on stage and their managers and the rest of the dancers also went out to greet the crowd. Time flies so fast. It seemed only yesterday that they were badly shamed and doubted because of the ‘female Big Bang’ hype surrounding them. They have long stepped out of their predecessor’s shadows and now have a legion of supporters on their own. On hindsight, I wished the crowd would have shouted ‘PARK BOM!’ at the same time on specific parts while she was singing, similar to how her Korean fans normally do in their live performances. LOL Anyway, when the girls were already waving goodbye, Mon and I hurried outside to catch up with the others.

Happy 5 years anniversary to the most sickening KPop girl group!

On a different note, I am bursting to say something about the ubiquitous presence of monopods. When we were still waiting outside the venue, I saw a bunch of people carrying their monopods and it was the first time I’ve seen such in real life. I know that they are usually used to take selfies (I hate that word) of groups and I had a mental image of people pointing their monopods away from the stage, so that they can have a selfie with 2NE1 performing. Silly me. It was obviously an instrument to get a head up the others who are also watching the concert. While I accept that concert watching is no longer the same as before, given the technological advances and people wanting some sort of souvenir from their concert experience, I had a difficulty choosing photos from the concert because of cameras on sticks, protruding conspicuously in frames. LOL Look at these examples:

Exhibit A – Bom with the monopods, and Bom without them

Exhibit B – CL with and without the monopods

My point-and-shoot camera was placed in the lowest megapixel setting because it allows continuous shots. I was confident that I would at least get a decent frame in one of those twenty to thirty consecutive shots. However, there were a lot of times where the 2NE1 member was clear, but there was a monopod covering her. LOL There’s nothing I can do with that bizarrely placed lightstick in that CL gif above, but the monopod was stretching from the bottom to the top of the frame. There’s only so much my Photoshop skills can do, as I unfortunately do not know how to remedy Dara’s shot below. =/

And another monopod ruined what could have been a perfect shot

Oh well, dodging monopods sounds petty now, compared to the experience of being that close to 2NE1 performing. ^_^ Again, a million thanks to Charm for being the fairy godmother to save the day. I knew deep in my heart that I’d be 99.99% miserable from 8PM onwards in the apartment packing our things, thinking that the concert was happening at the same time. We went to North Park after for a hot and decent meal (we just functioned on hamburgers!) and discussed the funny things that transpired during those two hours (e.g. the possibility of monopods being totally banned, and the importance of a good deodorant before attending concerts). Mon and I had to leave early because we had to rest for the following day’s transfer to our new apartment!