Continuing our adventure from the day before, we’ve learned our lesson on how to best deal with the extreme cold, and that would be putting more garments.

Granted that I had a hard time feeling myself and my surroundings with the clothes I had the day before, I thought that it would be easier to remove a garment and stash it in my bag if it gets too warm. 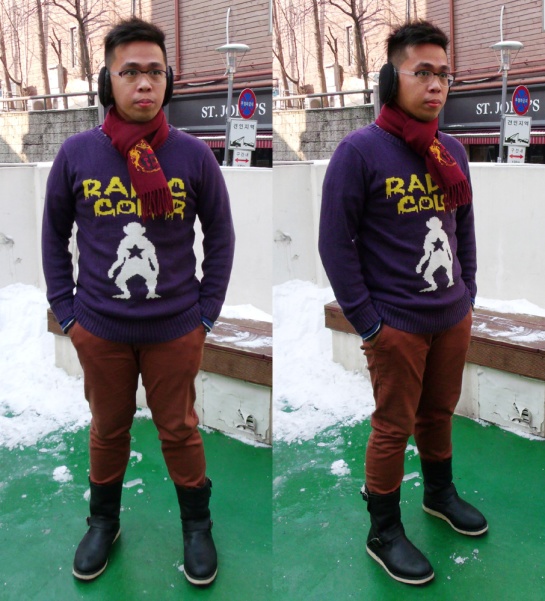 First things first, I needed some moisturizer and petroleum jelly. We had a hard time looking for some because most of the shops in Myeongdong are cosmetic stores and a basic petroleum jelly would most likely not end up in their shelves. As for the moisturizer, I was not adventurous in trying out the things they have and was just looking out for some Nivea products. And then it clicked — there was a Watsons store we passed by yesterday and I knew right away that they will carry the things I needed. Watsons did not disappoint me — a small tub of petroleum jelly for KRW 1,450 and a pack of two Nivea Men’s Moisturizing Gel for KRW 14,950. I still regretted forgetting to pack my own moisturizer because that was KRW 14,950 lost from carelessness.

Kesha! Call Naynay and Laquanda and tell them to bring the vaseline!

So after seriously moisturizing my face, lips, nose and fingertips, we went to our first stop: Myeongdong Cathedral. Since we were already in Myeongdong, we just walked going to the cathedral as the structure was very unmistakable even from a distance and we had no problems finding it. We have already seen lots of churches, especially here in the Philippines, and even if the architecture of Myeongdong Cathedral looked quite familiar, it still impressed me a lot. Frankly, I had little knowledge of the approximate number of Catholics in South Korea and I had a feeling that there might not be too many but I was happy to see that there were quite a lot of people inside the church when we went in. And as they say, you can make a wish when visitinga church for the first time and that was what we exactly did.

Mon and I outside Myeongdong Cathedral 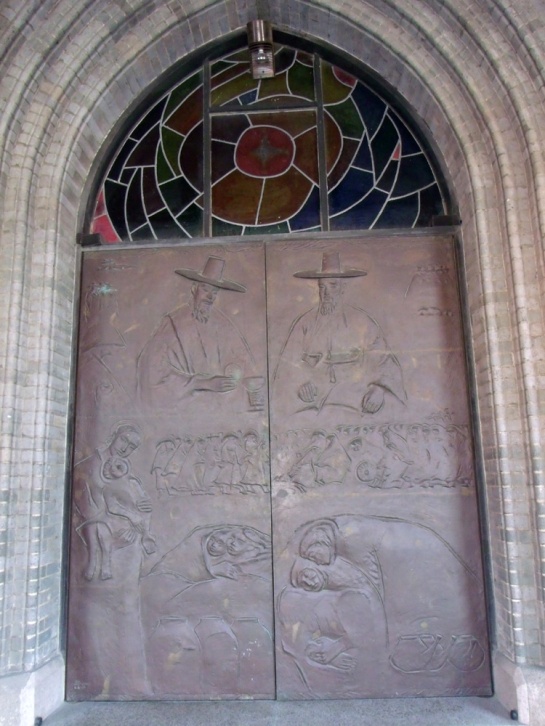 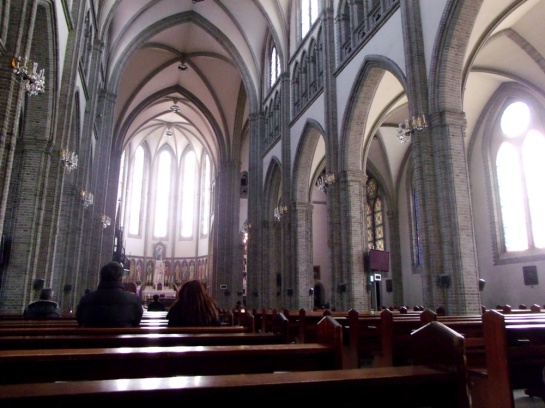 We also had a great time playing with the snow outside the cathedral and I just loved seeing the snow on my hair, scarf and gloves. However, I’ve noticed that the gloves were not warm and thick enough to protect me from the cold. Given that it was just around noon when we went to Myeongdong Cathedral, I had shuddered thinking how cold it would be much later that day, the same way we almost froze over the day before.

Snow on my hair and my gloves

As a result, we bought a new pair of gloves (KRW 5,000/pair, which was 80% wool and 20% something else), and a red muffler (KRW 10,000). The latter’s color was very Veruscka in Japan as shot by Avedon and Raquel Zimmermann as styled by Grace Coddington, non? =D The stores are more or less selling the same item but we tried to find the ones being sold at the lowest price. Some of these stores sell them for KRW 8,000 and the giant mufflers were at KRW 15,000, but as we were trying to save money from our limited budget, we just braved the cold to find the cheapest one than just buy on a whim.

Our next destination was Namsangol Hanok Village, which was just a station away from Myeongdong station. After leaving the station from Exit 3, we just followed the bunch of tourists we assumed to be going to Namsangol. At first, I thought that we might be going to a university/school but Mon’s quick Hangul-reading confirmed that we were at the right place.

Mon standing by the entrance of Namsangol Hanok Village

The place was beyond lovely and maybe I was extra giddy because there was snow everywhere! At that point of our trip when the snow from the previous week’s heavy snow fall has started melting in downtown Seoul, any place to see that much white made my heart skip a beat. I might have hated the bare cold but I was extremely fine with the cold with snow.

Mon and I in this Korean winter wonderland

It was really nice playing with the snow and I always felt like a kid experiencing his first winter. There were also a lot of Chinese tourists touring the place with us and they came in droves. We had a little difficulty taking photos in some areas of the village, and we literally had to wait for them to get out of the place.

Mon fooling around with the snow

Another timer picture — bless this tripod

We then went back to Myeongdong to eat lunch because we also had to change rooms in Namsan Guesthouse 2. We stayed for a night in the Twin Room A, but for the next three days, we stayed in Twin Room B. Unfortunately, we were not so lucky like the previous day when they allowed us to check-in way earlier than 2:00 PM. So visiting Namsangol Hanok Village to maximize our time prior to changing rooms past 2:00 PM was a good decision.

Tiger on the stairs!

After transferring, we wasted no time and left the guesthouse to visit the Children’s Grand Park. So from Myeongdong station, we travelled two stations to Dongdaemun History and Culture Park, then transferred to Line 5 and took the longest train ride to Gunja station. From there, we transferred to Line 7 as the Children’s Grand Park station was just a station away. We were to leave on Exit 5 and we immediately knew that we were on the right way because of this nicely done tiger on the stairs. 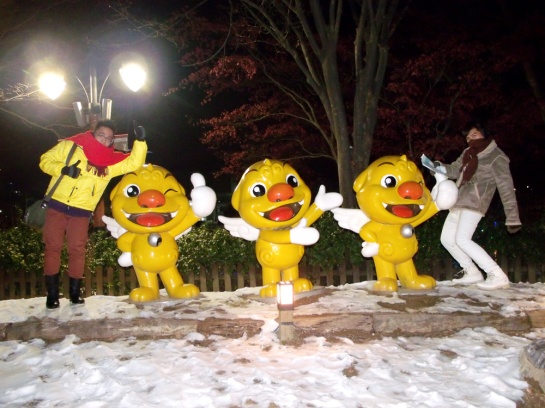 With the three Haechis near the entrance 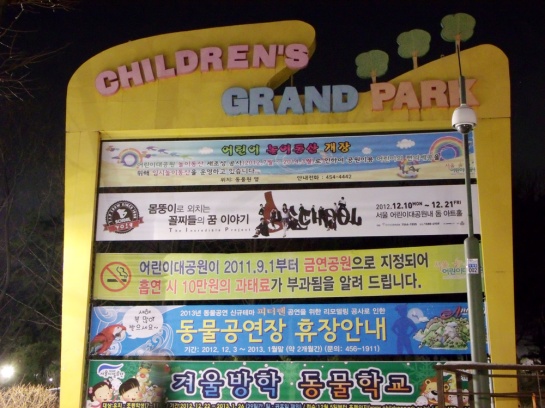 Obviously, we arrived in the park when it was already very dark and the zoo was already closed. In spite of this, we still had a great time walking around the park, albeit the cold temperature. The ground was entirely covered with snow and I was clicking madly to capture the beauty of the place. The park had several sections, from a frozen pond with deers and ice sculptures, to robots and aliens on another. 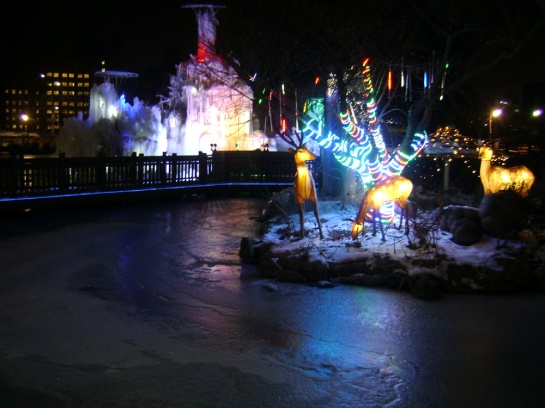 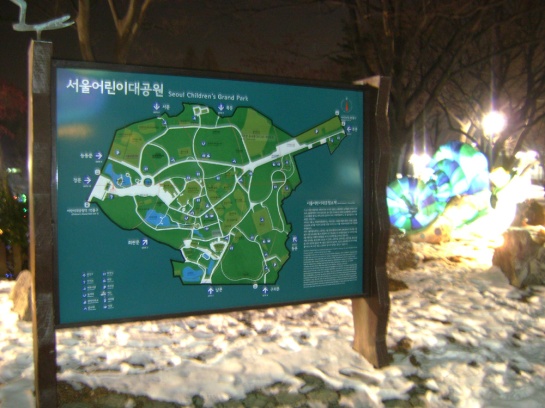 We were not able to go around the entire park, though, because Mon was already freezing. It did not help that we were also quite hungry from the day’s walking. But we were so happy to see this cute and fat kitty running around the snow. She allowed us to approach her, but not close enough because she would run when we were a meter away. However, we were not too sad because we definitely had more kitties in store for us when we visited the Cat Café in Myeongdong much, much later that day. ^_^

A fat kitty running around the snow 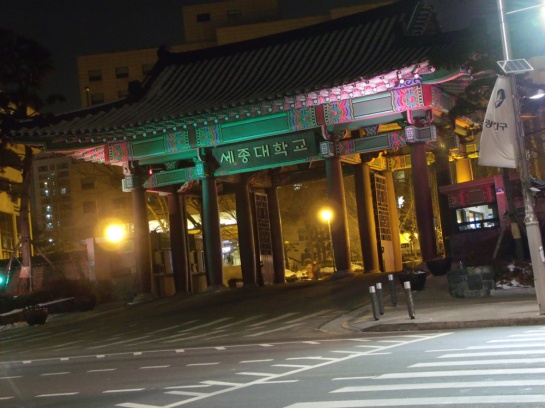 After Children’s Grand Park, we went to N Seoul Tower even if it was insanely cold. We were originally to take the bus on Chungmuro station, but as we were not too sure where was the bus stop, we just followed the same route we used last year when we had accidentally gotten out in Dongguk Unviersity station (or forgotten to stop at Chungmuro station). So from the park and transferring to Line 5, we travelled all the way to Cheonggu station and transferred to Line 6 for Yaksu station, which was only a station away. From there, we transferred again to Line 3 to finally arrive at Dongguk University station.

After several minutes of riding the bus, we finally arrived at the N Seoul Tower bus stop and we immediately stopped on our tracks because the temperature was way worse that what I’ve prepared for. I had a t-shirt, two knitted sweatshirts, a scarf, a muffler and a big puffer jacket on and I was still shaking like mad from the cold breeze.

The Pavilion in N Seoul Tower

View of the N Seoul Tower from below

Prior to coming here, Mon and I were planning to try our luck finding the locks we have placed last year. Fat chance, though. I think a ton of locks has been already placed in the spot where we attached ours that we did not see even the smallest trace. LOL

Haechi has been one of the cutest mascot/city symbol we’ve seen in years and we were so delighted to see the Haechi statue in N Seoul Tower again. I even remembered changing my pose the last second just to imitate what I did last year. ^_^

with Haechi – before and after

We did not bother going up the tower because we have already seen what was inside before. We just wanted to see the tower up close when it was lit for the evening and see Seoul city at night as well. 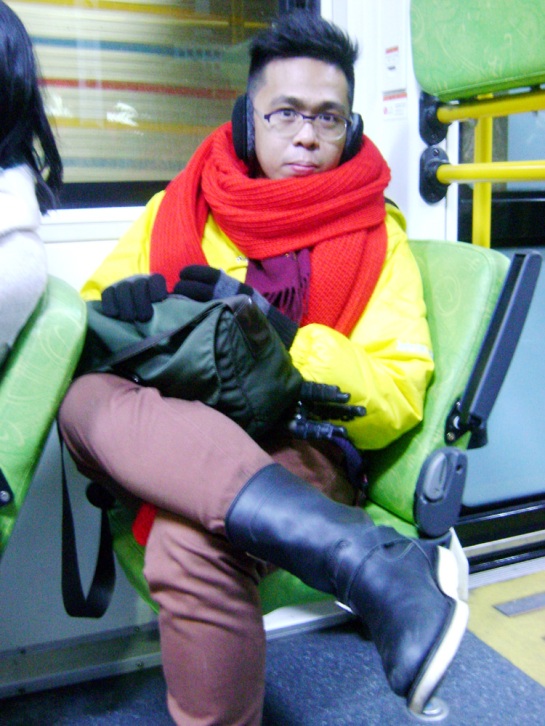 Taking the bus back to Myeongdong from N Seoul Tower

Very cold and hungry, we took the bus back to Myeongdong as we were more confident that we can find our way around this time and find a place to ear our late dinner. But we were more excited of the prospect of finally visiting the Cat Café in Myeongdong. It merits its own entry because of the cuteness overload from 25 kitties in one place. ^_^

*See related posts in this “Winter in Seoul 2012” series.